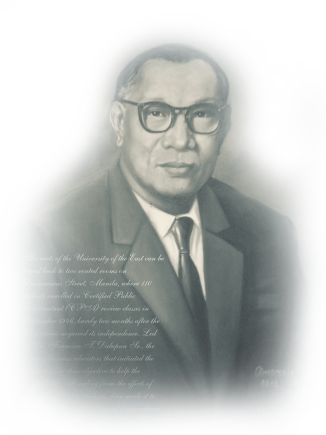 The roots of the University of the East can be traced back to two rented rooms on Dasmarinas Street, Manila, where 110 students enrolled in Certified Public Accountant (CPA) review classes in September 1946, barely two months after the Philippines acquired its independence. Led by Dr. Francisco T. Dalupan Sr., the group of business educators that initiated the classes made it their objective to help the country, then still reeling from the effects of war. Out of the 110 students, four made it to top places in the CPA board examinations in 1947.

Encouraged by this initial success, Dr. Dalupan and his colleagues opened the Philippine College of Commerce and Business Administration (PCCBA) along R. Papa St. in Sampaloc, Manila, to 350 students in the summer of 1947. The following year, as more students enrolled and more academic units were organized, the PCCBA moved to what is now the main campus on Claro M. Recto Avenue. 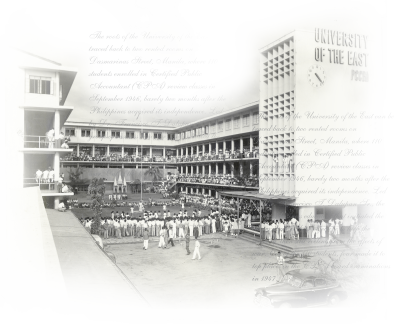 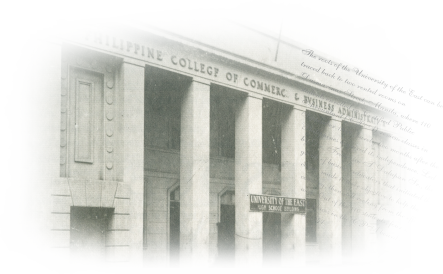 The PCCBA was granted university status on July 3, 1951 and was renamed the University of the East, with Dr. Dalupan as President and Chairman of the Board of Trustees.
The first members of the Board were Herminigildo B. Reyes, businessman, scholar and former Vice President of the University of the Philippines; Santiago F. de la Cruz, CPA and business executive who later succeeded Dr. Dalupan as President; Jose L. Torres, soldier, businessman and accountant; and Jaime Hernandez, the first ever Filipino Auditor General of the then Government Auditing Office (GAO), now the Commission on Audit (COA) who later became the Secretary of Finance. 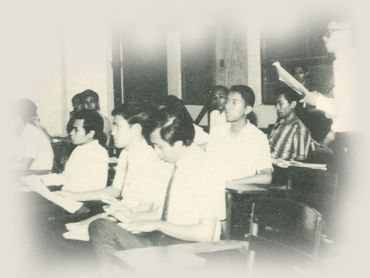 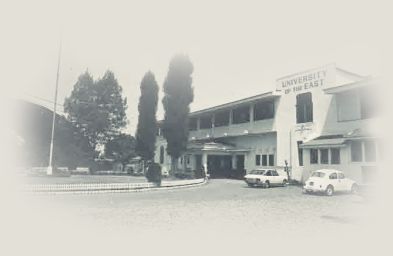 In June 1954, Dr. Dalupan and his associates opened a vocational and technical training center in Caloocan (then known as UE Tech) on a 4.86-hectare lot along Samson Road, Caloocan. Now called UE Caloocan (Caloocan itself is now a city), it is now an academically autonomous campus and headed by a Chancellor. The Caloocan Campus’ Tan Yan Kee Academic Building houses the Colleges of Arts and Sciences-Caloocan, Business Administration-Caloocan and Fine Arts. The College of Engineering-Caloocan has its own building on the Campus. The UE Caloocan grounds had been used for ROTC and CAT instruction since 1986.

In 1955, the University purchased a one-hectare lot along Aurora Boulevard in Quezon City. On it was established the College of Medicine. Two years later, on May 17, 1957 , the College was converted into a Foundation and named the UE Ramon Magsaysay Memorial Medical Center (UERMMMC).

In 1962 the University acquired a 5,850-square meter lot across the Medical Center along Aurora Boulevard . This became the Research Center for Sciences, Humanities and Culture. 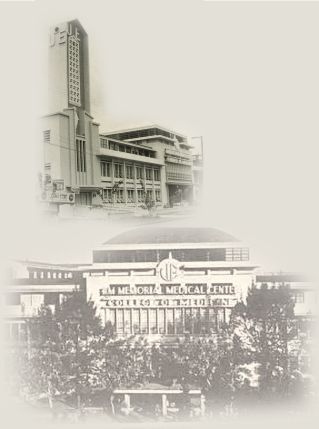 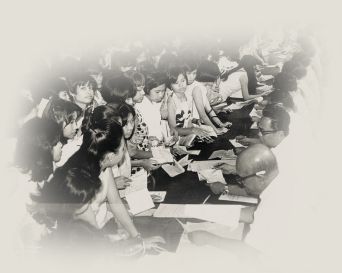 Simultaneous with the University’s expansion in facilities was its rapid growth in enrollment. From the original 110 students in 1946, the student population steadily grew each year until 1960, when UE became the first Philippine university to break the enrollment mark of 60,000. The highest enrollment record was achieved during the first semester, SY 1975-1976, with 67,443 students registered.

The economic crisis and recession that ravaged the country in the 1980s did not spare UE. The devaluation of the peso, inflation, the cost of wages, and faculty, personnel and student strikes affected UE and enrollment declined. This period intensified into a crisis that almost led to the school’s being sold to a foreign religious group. Financial troubles and academic decline continued to burden UE through the Eighties, prompting Dr. Isidro D. Carino, who became President in 1984, to apply very stringent measures. These included personnel reduction, cost-cutting measures and renting out of school premises and facilities in short-term and long-term leases. UE offered innovative courses, such as the ladder type of curriculum, a special course for executives, the Institute for Computer Studies and Systems-now the College of Computer Studies and Systems or CCSS-and scholarships for accounting and engineering students. The lease of facilities enabled UE to hold back tuition fee increases in SYs 1986-1987 and 1987-1988. When Dr. Carino was appointed Secretary of Education in 1990, and under the auspices of benefactor Lucio C. Tan, Panfilo O. Domingo, a UE CBA alumnus and the former President of the Philippine National Bank, took over as UE’s Chairman of the Board of Trustees and Chief Executive Officer and concurrent Acting President. A management expert, Chairman Domingo set about curing the financial ills of the University by retiring its short-term debts and instituting fiscal and operational reforms.

In 1992, Dr. Rosalina S. Cajucom, a UE CBA alumna and former Treasurer of the Philippines, became the President of UE-replacing Dr. Arturo Q. Trinidad, who was UE President from 1991 to 1992. Upon President Cajucom’s retirement in mid-1995, Chairman Domingo again assumed the presidency until the appointment of Dr. Josefina R. Cortes to the position in 1997. Upon President Cortes’ retirement in 2003, Mr. Baltazar N. Endriga, a UE CBA Manila alumnus, succeeded her as President, his UE presidency running from August 2003 to July 2005. Chairman Domingo was once again the concurrent President from September 2005 up to January 2006, when Dr. Ester Albano Garcia, former Chairperson of the Commission on Higher Education (CHED), was appointed UE President.

Within five years, the University’s loans were substantially reduced and the long-accumulated operating deficit was eliminated from the books. At the same time, Chairman Domingo embarked on a massive rehabilitation of the institution’s infrastructure and academics. By the fourth quarter of 1999, under Chairman Domingo, the UE Board of Trustees authorized the retirement of the University’s remaining bank obligations in full, rendering UE totally debt-free

After Chairman Domingo passed away on June 26, 2008, at age 83, Dr. Lucio C. Tan assumed the position of Chairman of the Board and CEO of the University.